We love these supreme cauliflower steak pizzas since they're hearty enough to serve as a meal. And when you're hungry, these healthy pizzas sure hit the spot!

Another reason to love cauliflower steak pizzas: they're super simple to make. It's simply a matter of cutting the cauliflower into "steaks" and roasting them until they turn tender, about 20 to 25 minutes. After that, you add your toppings and broil for a few minutes and you're done!

If you're not familiar with Rao's pasta sauce, it's one of the best low-carb sauces out there. It's made with simple, high-quality ingredients and doesn’t include any added sugars or preservatives. The ingredients are simply: tomatoes, olive oil, salt, pepper, onions, garlic, basil, and oregano.

How To Cut Cauliflower Steaks

The trickiest part of this recipe is cutting the head of cauliflower into steaks. In case you haven't done it before, here is a good video to watch (please be aware that our recipe calls for thinner cut steaks).

It's important to keep the core or stem of the cauliflower in tact or else the steaks won't stay together. Additionally, it's best to buy a large head of cauliflower since it'll be easier to cut into several steaks. In our experience, we can usually cut three steaks from one large head, which is fairly average. Sometimes you may only slice two steaks, which is fine too.

STEP 1: To start, wash the outside of the cauliflower head and remove any outer leaves. If the stem is long, you may trim it, but it's important to keep the base in tact.

STEP 2: Next, you'll use a large chef's knife to cut the cauliflower down the middle. Then, from the center, you'll cut ½ to ¾-inch thick steaks that include the cauliflower's core. When you've run out of core, then you're finished cutting steaks. Any remaining cauliflower florets are yours to use — you can roast these with the steaks or you can save them for another use.

If you want to try alternative toppings on your cauliflower steak pizza, here are other yummy low-carb considerations: olives, sliced mushrooms, sliced bell peppers, ham, or basil. There are so many options! 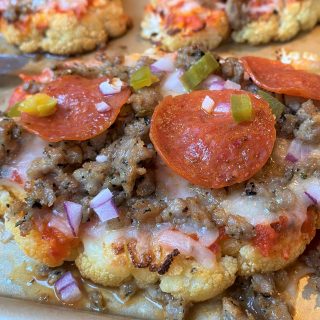