By using a sheet pan, you can create one of that quickest and tastiest spaghetti zoodles! And when you add sliced sausage, it's next level!

Here's another delicious weeknight sheet-pan dinner — this low-carb and keto spaghetti zoodles and sausage sheet pan. It's one of simplest ways to prepare spaghetti zoodles since you don't need to "sweat" the zoodles (draining the zoodles of excess water before cooking so they don't become soggy) before roasting in the oven along with the sliced sausage.

In this recipe, we use our favorite pasta sauce, Rao's Arrabbiata Sauce, along with Aidell's Andouille Sausage (Cajun Style) to give the zoodle spaghetti a nice, spicy kick. However, you can change it up by using an alternative flavor of sauce or sausage.

Once in the oven, this sheet pan spaghetti zoodles and sausage takes just 15 minutes. And like most sheet pan dinners, the clean-up is easy peasy.

We highly recommend using Rao’s pasta sauce since it’s one of the best low-carb sauces out there. If you prefer a sauce that isn't spicy like Arrabbiata, then you can simply swap for a regular marinara sauce.

We also recommend using Aidell’s smoked sausages since they are one of the lowest carb sausages out there and are made with all natural ingredients. In this recipe, we use Aidell's Cajun-Style Andouille, but you could consider another flavor like Italian. You could even replace the sausages with Aidell's meatballs (or another brand if you prefer), but since meatballs are typically higher in carbs we opted for sausages.

STEP 1: Line a sheet pan with parchment paper and pre-heat the oven to 350 degrees F.

STEP 2: Next, you'll prepare is the zucchini zoodles. You can either purchase them already spiralized at the store or you can spiralize at home. If you're spiralizing at home, you'll likely need at least two zucchinis, depending on the size of the zucchinis. We use the OXO spiralizer, which makes the whole process quick and easy.

When done, spread the zoodles about to fill half the sheet pan. It's okay that the zoodles overlap as long as they are evenly spread about. Then, combine with a tablespoon of olive and oil until lightly coated and season with a little salt.

STEP 3: After, slice the sausages into thin slices that are about ¼- to ½- inch thick. Place the sliced sausage on the other half of the sheet pan in one even level with a little space between each.

STEP 4: Put the sheet pan in the oven and let cook for 10 minutes. Then, remove the pan from the oven, and combine the zoodles with a ½ cup of Rao's Arrabbiata Sauce and return the pan to the oven for 5 minutes more. Take out and sprinkle ¼ cup of grated parmesan across the zoodles and sausage. Then, plate and serve! 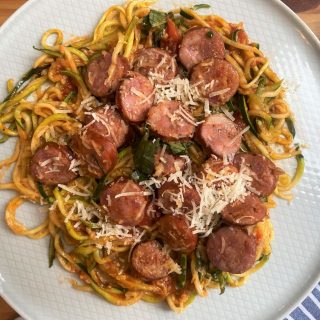 Low-Carb Simplified
By using a sheet pan, you can create one of that quickest and tastiest spaghetti zoodles! And when you add sliced sausage, it's next level!
No ratings yet
Print Recipe Pin Recipe
Prep Time 10 mins
Cook Time 15 mins
Total Time 25 mins
Course 30 Minutes or Less
Cuisine Italian
Servings 2
Calories 513.2 kcal