This keto masala chai (also referred to as chai tea) is pretty darn tasty and hits the spot since it's creamy, a little sweet, well-spiced, and so comforting to enjoy during some down time.

Masala chia is one of our favorite comfort drinks of all time. For us, it brings back fond memories of traveling throughout India, where we drank it quite frequently. Here in the United States, it's hard to find a masala chai as good as the ones we got in India — let alone one that is keto and low-carb friendly! That's why we simply prefer to make our own keto masala chai at home.

And this keto chai so easy to make! It's simply a matter of boiling water with sliced ginger, gently crushed cardamom pods, and half of a cinnamon stick. After it comes to a boil, you'll turn off the heat, add the tea bags, heavy cream and sweetener, and let steep for about 5 minutes. At that point, you'll give it a taste and adjust the level of cream and sweetener to your liking (we usually add a tiny bit more of both!). Then, you'll pour into two cups through a tea or fine-mesh strainer. And that's it -- it's all done in about 10 or so minutes!

Each serving of this keto chai is just 1 net carb.

What is Masala Chai?

Masala chai is an Indian spiced tea typically made with black tea, water, milk, spices, and sweetener. In India, masala stands for spice and chai stands for tea.

Typical spices include green cardamom pods, ginger, cinnamon sticks, cloves, black peppercorn, and other spices (such as nutmeg or star anise). However, there are many variations of masala chai, and people typically adjust the milk, spices and sweetener to their own taste preferences. Many people in India drink chai masala on a daily basis and may enjoy it with some sort of biscuit or cookie.

Most of the ingredients you probably have at home, except for the green cardamom pods. But, if you ask us, they're worth it for this drink!

How to make it

To start, you'll prepare the spices. You'll slice an inch of fresh ginger in ¼ -inch pieces. Then, you'll gently crush the green cardamom pods while keeping the skin intact. After, you'll break a 3-inch cinnamon stick in half.

Next, in a small pot, add 2 cups of water along with the sliced ginger, crushed cardamom pods, and half of a cinnamon stick. Bring to a boil. Then, turn off heat and add the tea bags, cream and sugar. Stir and let steep for 5 minutes (or more for increased flavor). Before serving, taste to adjust the level of cream and sweetener to your liking. Last, you'll use a tea or fine-mesh strainer to strain the tea into two cups.

Can I use a dairy-free milk to replace the heavy cream? Yes, you can use a nut milk, such as almond milk, instead of heavy cream. For two servings, you'll use one cup of water with one cup of nut milk. All the other ingredient amounts will remain the same and the instructions for making will remain the same (except you'll use 1 cup of water (instead of 2) and you'll replace the cream with 1 cup of nut milk).

Can I use a different sweetener? Yes, you can use whatever sweetener you prefer. We recommend sweetening to your desired taste — so start with a little and add more until you get the right amount.

Can I store leftovers in the fridge? Yes, you can store in a covered container in the fridge for a few days and can reheat in the microwave.

Here are some other low-carb and keto Indian recipes you may enjoy. 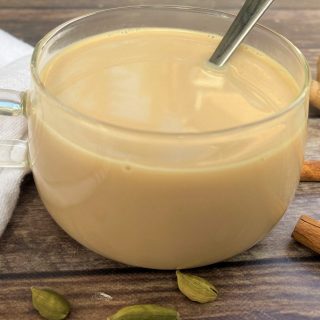 You can store the masala chai in a covered container in the fridge for a few days and can reheat in the microwave.