Just 15 minutes is needed to create one of the yummiest, low-carb eggplant side dishes out there!

In this Asian-inspired eggplant recipe, adapted from chef Jacques Pépin in Quick and Simple, Japanese eggplant (or Chinese eggplant) is broiled until tender and charred, and topped with a delicious spicy soy glaze made from soy sauce, minced garlic, sambal (or other hot/chili sauce) and olive oil.

Broiling is one of the quickest and easiest ways to prepare eggplant. After slicing and lightly coating the eggplant with oil and salt, it goes under the broiler to cook for about 3 to 4 minute per side, until tender and charred. Another benefit to broiling eggplant: you don't have sweat the eggplant with salt to remove excess water beforehand (which can take up to 20 minutes!).

The spicy soy glaze takes just a few minutes to prepare since it's made with only 4 ingredients. It's easy to customize the glaze to you're liking, too. You can make it less spicy, more spicy, or even sweeten it up with sugar-free sweetener. When the glaze is poured over the tender eggplant, the eggplant quickly soaks it up, creating an umami flavor bomb that bursts in your mouth.

If you're like my husband, you'll love this dish even if you're not an eggplant fan.

This spicy soy eggplant is a perfect weeknight side dish since it's healthy, quick and easy to make, and low in carbs. Each serving is 6.2 net carbs.

Japanese eggplants are long, slender eggplants with thin, dark purple skin. They're slightly sweeter than other varieties and cook up quickly.

American and Italian eggplants are usually larger and wider than Japanese or Chinese eggplants and have thicker skin.

Eggplants are known for their sponge-like texture, which helps absorbs sauces and flavors.

Just a few steps to make this delicious eggplant side dish!

Then, it's time to broil the eggplant. We broil the slices for about 4 minutes per side. You'll flip slices as soon as they start to blister and char. Be sure to keep an eye on eggplant while broiling as it can burn quickly.

While the eggplant is broiling, you'll make the sauce. In a small bowl, combine garlic, tamari/soy sauce, olive oil and sambal. After the eggplant is done broiling on both sides, place the slices on a serving plate and drizzle with sauce. And that's it, you're done!

Are eggplants low-carb and keto friendly?

Eggplants are relatively low in carbs and high in fiber similar to other low-carb fruits like zucchini (yes they are fruits, not vegetables!). However most of their calories do come from carbohydrates, so if you're diligently counting carbs you should watch how much you eat so don't exceed your carb target and get kicked out of ketosis. A cup of cooked eggplant cubes (99 grams or about 3.5 ounces) has about 6 grams of net carbs.

What is Sambal Oelek?

Sambal is a spicy chili sauce that originates from Indonesia. It's somewhat similar to Sriracha or other Asian chili sauces/pastes, but it has no added sugar. Because of this, we prefer to use this chili sauce in our low-carb and keto recipes.

Can I sweeten the sauce?

For a slightly sweetened sauce, you can sweeten the sauce with a teaspoon or less of Swerve Sweetener or another sugar-free sweetener. We don't think the sauce needs to be sweetened, but the original recipe by Jacques Pépin is sweetened with a teaspoon of regular sugar. It just depends what you prefer! 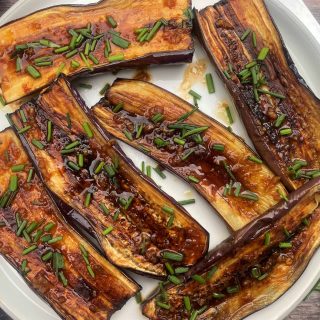