Keto Tuscan shrimp skillet is one awesome weeknight dinner! Really, you can't go wrong with this one. First off, it's screams yummy, comfort food since it's creamy, garlicky, and so satisfying. Plus, it's nutritious, low in carbs (just 6 net carbs per serving) and high in protein (45% protein by calories). And last but not least — you're whole dinner is done in 15 minutes with just one pan.

This all-in-one dish is filling (more than a half pound of shrimp per person!) and requires no sides. Simply serve as is and dinner is done!

To make this creamy keto Tuscan shrimp high in protein, we:

This creamy keto Tuscan shrimp is made with just 8 ingredients. Just a few notes on key ingredients:

This easy weeknight recipe is nearly fool-proof! The steps to making this quick keto Tuscan shrimp include:

STEP 1 - COOK SHRIMP: If using frozen shrimp, defrost shrimp according to bag instructions. In a large skillet over medium heat, melt one tablespoon of butter. Add minced garlic and sauté until fragrant, about 30 seconds. Add shrimp and cook until opaque, about 3 or so minutes. Season with salt and pepper. Remove shrimp from skillet and set aside on separate plate.

STEP 2- COOK TOMATOES: Return the skillet to medium heat, and melt the other tablespoon of butter. Add grape tomatoes and cook until softened, about 3 or 4 minutes. Gently smash tomatoes to release juices.

STEP 3 - ADD SPINACH: Add spinach in batches and cook until wilted, about 2 to 3 minutes. Season tomatoes and spinach with salt and pepper.

STEP 4 - COMBINE REST OF INGREDIENTS: Add heavy cream and parmesan cheese. Stir and simmer for 2 to 3 minutes. Return shrimp back to pan. Stir until heated, about a minute or so more. Serve immediately.

Despite being technically a fruit, grape tomatoes are fairly low in carbs (about 3.4 net carbs per 100g) and can be eaten in a low-carb or keto diet unless you have a very strict daily carb target.

Can I replace the tomatoes with sun-dried tomatoes?

Yes, but you'll have to use a smaller amount if you want to keep it low carb and high protein. For example, replacing the 1 cup of grape tomatoes with ¼ cup of jarred sun dried tomatoes, will reduce the protein percentage to 40% and increase the net carbs to 10g per serving. Overall, this would still be a high protein meal and low carb unless you are on a very strict carb target.

Can I use frozen shrimp?

Yes, you can use fresh or frozen shrimp for this recipe. If you use frozen, be sure to thaw according to bag instruction. We use peeled, deveined and tail-on shrimp. However, you can purchase shrimp without the tail, which can make it easier to eat. 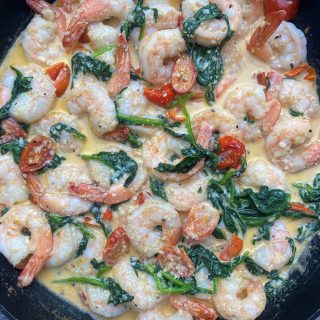