If we had to pick one of our favorite keto snacks or appetizers, these keto jalapeno poppers with chorizo might be it. Better than tortilla chips with some sort of Mexican cheese dip? Easily.

The filling in these poppers is warm and creamy, cheesy and meaty, and a little spicy (thanks to the chorizo). And, when paired with the crispy and slightly crunchy outside of the jalapeno (which is also a little spicy), it's SO delicious.

These jalapeno poppers take about 20 minutes to prepare and 20 minutes to bake. And every single minute of it is worth it! The preparation is simple since there are just 4 ingredients.

Preparing the Jalapenos
Since you'll be touching the spiciest parts of the jalapeno, we strongly recommend you wear gloves while preparing the jalapenos. The first time I made these poppers, I did not wear gloves and my hands felt like they were burning after (not cool!).

After putting on gloves and washing the jalapenos, you'll slice each jalapeno in half -- all the way up through the stem. Then, you'll remove all of the seeds and ribs with a spoon.

Be sure to remove all the seeds and ribs from the jalapenos. Even a rather small amount of seeds or ribs left in the jalapenos can make the poppers quite spicy. The second time I made these poppers, I was sloppy about cleaning out the ribs and seeds and, boy, were they were spicy! But, don't worry too much -- as long as you remove most of them, you'll be fine. Just remember, there is some spice coming from the chorizo as well, so you don't want it too spicy.

Preparing the Popper Filling
The popper filling is simple and straight-forward to make. After you remove the casings from the chorizo sausages, you'll cook the sausage in a skillet, while breaking it down into tiny bits, until cooked through, about 6 to 7 minutes.

With a slotted spoon, you'll remove the sausage from the pan and put in a large bowl. You'll mix it with the softened cream cheese and shredded Mexican cheese. I sometimes use my hands to make sure the mixture is well combined.

Stuffing the Poppers
After you line a rimmed baking sheet with tinfoil, you'll arrange all the halved jalapenos on the sheet and begin stuffing the peppers with as much stuffing as you can (without it spilling over the sides). If some of the jalapenos don't lay flat, you can slightly trim the bottom to create more of a flat surface for it to lay flat. Once you're done stuffing, then pop them in the oven for 20 minutes.

We typically eat the poppers as-is when they're done, but you can also serve with a side of ranch dressing or sour cream, which can help tame the spice.

We hope you enjoy them. Cheers to one of the best appetizers out there! 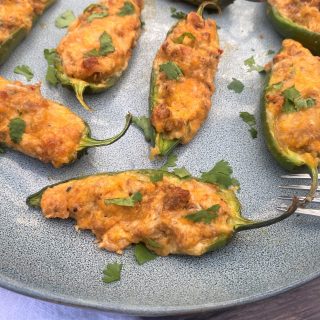 Before preparing the poppers, remove the cream cheese from the refrigerator to let it soften.