Nobu's New Style Sashimi with salmon is such a delicious and simple sashimi dish to make home. Just 15 minutes to make and 2 net carbs per serving!

Our version of Nobu's New Style Sashimi may not look as beautiful as the famous restaurant dish, but we sure do love it! The first time we made it, we quickly gobbled it up and immediately talked about making it again. It's such a delicious and simple salmon sashimi dish to make home. And, of course, it's low in carbs.

Nobu's New Style Sashimi is full of umami flavor — thanks to the combination of tamari (or soy sauce), sesame oil, olive oil and yozu juice (we simply used meyer lemon juice), which is poured over the top of the salmon. The olive and sesame oil are heated to sear and partially cook the fish. The salmon is also topped with minced garlic, julienned ginger, chives and sesame seeds. The original recipe calls for red snapper fillet, but we chose to replace that with salmon sashimi. We simply prefer salmon, and chose to purchase it already sliced (making it easier on us!).

However, to make the dish truly amazing, you have to start with the best sushi-grade salmon you can get. We bought thinly sliced salmon sashimi from one of the best fish shops in Seattle: Seattle Fish Guys. The salmon sashimi there is amazing — it just melts in your mouth. Therefore, if you're making this recipe, it's critical to get the best sushi-grade salmon you can get your hands on — it makes all the difference.

Nobo's New Style Sashimi may seem like a complicated dish, but it's super easy and quick to make. It took us about 15 minutes to make, and if we can make it, most anyone certainly can!

This recipe can be found in "Nobu: The Cookbook". There are many amazing and simple recipes in this cookbook, so you be sure to check it out if you like this dish.

This recipe for New Style Sashimi involves minimal adaptations to the original Nobu recipe. These adaptations include replacing the red snapper filet with sushi-grade salmon sashimi, nixing the the carrot garnish, and making chives optional. We also replace the yozu juice with lemon juice since it's much easier to get.

Steps to Making It

Here are the steps to making this dish:

Step 1: Prepare the minced garlic and julienned ginger spears (see photo in ingredients). In a small bowl, combine the tamari or soy sauce with the yozu or lemon juice and mix well.

Step 2: In another small bowl, combine olive and sesame oil and mix well.

Step 3: Place the sliced salmon sashimi on a large serving plate in a circular design. Evenly spread the minced garlic across the pieces of salmon. Place one or two ginger and chive spears (if using) on top of each piece of salmon. Sprinkle the sesame seeds across the salmon.

Step 4: Spoon the tamari or soy sauce mixture over the top of the salmon

Step 5: In a small pan over medium-high heat, heat the olive oil mixture until it just begins to smoke. Since I get nervous about overdoing it, I usually stop heating as soon as it reaches 300 degrees F. Immediately pour the mixture across the top of the salmon. When you pour the heated mixture over the salmon, you should hear it sizzle as it sears the salmon.

After, garnish with chivies (optional) and serve immediately.

Nobu is a renowned Japanese restaurant and hotel chain created by chef Nobu Matsuisa (and funded by Robert De Niro and a few other notable people). This dish, which is a favorite of Leonardo DiCaprio, was created by Nobu when, one day, a customer declined white fish sashimi since she couldn't eat raw fish. Since Nobu didn't want the dish to go to waste, he poured hot olive oil over the top to partially cook and sear the fish. At that point, the customer ate it and cleaned "every scrap" off her plate.

Unfortunately, we haven't ate at Nobu the restaurant yet. But, we hope to someday make it to one of the locations. Maybe the next time we're in Southern California. We would love to hear if you ate there and what you thought! 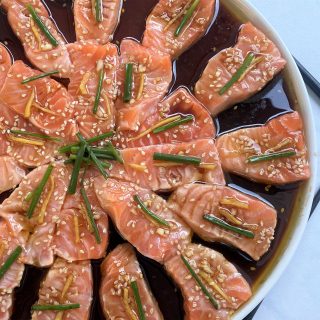