With just 8 ingredients, this shortcut keto paneer masala tastes similar to what you'd get served at an Indian restaurant. It's spicy, rich and creamy with tender paneer cubes. And it only takes 15 minutes to make!

There are only 8 ingredients in this shortcut recipe — many of which you may already have in your pantry or can easily purchase at your local grocer. If you can't buy paneer locally, you can replace it with tofu or roasted cauliflower.

This low-carb and keto paneer masala is perfect for busy weeknights since it only takes 15 minutes to make. We typically serve with cauliflower rice or low-carb pitas. Each serving if just 6 net carbs.

What is Paneer Masala?

Paneer Masala is an Indian curry with paneer and a gravy/sauce consisting of tomatoes, onion, ginger, and a number of spices. Paneer Masala is similar to paneer butter masala and paneer makhani since they're all tomato-based gravies that include paneer; however, the ingredients in each slightly differ. In addition, paneer butter masala and paneer makhani typically include cashews.

Although some of the ingredients differ from a more traditional paneer masala, this recipe tastes just as delicious. Key ingredients include:

Just a few, simple steps to making this paneer masala!

STEP 1: In a small to medium-size pot, bring water to a boil. Cut the paneer into ½-inch cubes.

STEP 2: After the water comes to a boil, remove the pot from the heat. Then, season the water with salt and immerse the paneer in the water. Let the paneer soak for 10 minutes. Drain the paneer following.

STEP 3: In a large saucepan, combined the arrabbiata sauce, chicken/vegetable broth, garam masala, ginger, coriander and heavy cream on medium heat. Stir to combine. Add the the paneer and cook for a minute or two more.

STEP 4: Serve immediately along with riced cauliflower or low-carb pitas. 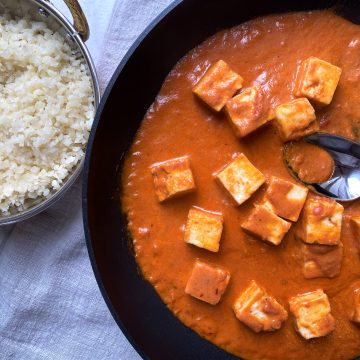